Biodiversity, the stakes for the future
By Eric Tourneret 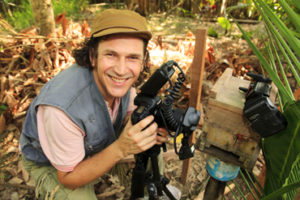 Bees and flowers are indissociable and their bond has led to the coevolution and the diversity of species that we know today. Since the beginning of time, bees have interested humans, and this ancestral link, which goes back to the Paleolithic period, can be found in all cultures in the world. Honey is described as the food of gods, a source of intoxication, but also as a medicine for people and animals. However, it is through pollination that the bees’ contribute to natural ecosystems and agriculture. 40% of the world’s food production depends on pollination.

My project “The Bee Nation” began in 2004 with the idea of reaching the general public through original and never before seen images of the life of bees.
Sensitized by the French beekeepers’ battle against the systematic use of insecticides, I started a three-year long fundamental work in France on this emblematic insect, meeting beekeepers and immersing myself in the life of the hive.
Bees are alive, wild, and if photographing them doesn’t respect their instincts and nature, it won’t work. Gentle, sometimes feisty, they will always call me to order if I am distracted or maladroit.

For me honey hunting is a passion for someone is a need...I never forgot it.

My photographic approach was to make the bees “come alive” by posing them like models. Most of the photos were meticulously prepared with concern for the graphic result and portrayal of the size of the bee in relation to its environment. Each flower demands a different visual approach and I often had to keep shooting until I fully understood the flowers form. The other challenge was to keep away from already seen images and each time seek a different angle, another perspective, another cultural or photographic reference.

In 2007, I extended his project to a worldwide dimension and structured his approach around the relationship between Man and the bee on five continents, from the most archaic harvesting methods to industrial and commercial beekeeping. The photographs from the “Honey-gatherers” project provide a look into the history of modern beekeeping and also into the way of life of people who, like the bees, risk dying out. The project’s main objective is to show the vital interdependence between mankind and its environment in order to promote the idea of true action for sustainable development. But it also wants to testify to and document for future generations this part of human history, that particular and unique link, bordering on domestication, between humans and an insect.

A true sentinel of the environment since the deciphering of its DNA, which confirms it sensitiveness to toxic substances, the bee is affected by the same evils that are decimating “primitive” people. Population growth and globalization engender uncontrolled preying by mankind on natural environments: deforestation, climate change, chemical pollution, monoculture, GM, propagation of viruses and parasites. And yet, these winged insects provide a free service to humanity by contributing to the sexual reproduction of flowering plants. Scientists estimate their annual contribution to the world economy at 153 billion euros (208.5 billion dollars).

This fundamental work on the bee, nature and mankind is for me a commitment. I am conscious of the urgency for the human race to finally take global and effective actions to protect nature.
People are speaking more and more about bees and their possible extinction. It’s true that all insects are endangered by people’s actions, through factors as diverse as insecticides, monoculture and herbicides, as well as deforestation and all the predation we practice on the environment.
But by taking bees as an example, I want to speak just as much about perennial management and sharing. A colony, in the case of a food shortage, will share the slightest drop of honey, even if that leads it to the brink of extinction.
The individual or the collective? It’s society’s choice. Will mankind be capable of sharing the Earth’s free resources, or will the folly of some lead to humanity’s destruction?”

Why this work on bees?
I grew up in a village on a mountainside above Annecy a nice city with a lake in the Alps close by Switzerland. When I learned about the dying out of the bees, my instinct as a child of the countryside told me something was wrong in our relationship with nature. I chose to commit myself to the bee and pass on the idea of a living nature.

Of all the countries you have visited, which has left you with the best memories?
My best memories are linked more to the people than the places, to the encounters, the sharing. I loved Argentina, which I didn’t know before and where I was received in the heart of a family, where you feel the solidarity of people who have known periods of wealth, but also of misery. In Nepal, the devotion of the Buddhists circling the stupas always touches me enormously, as does the organization of the villages of the Raïs with whom we stayed, and the dignity of their silence… Those people who live in extreme conditions always have a smile ready.

What is the bee’s main contribution to humanity?
The pollination of all flowering plants, fruit and vegetables included. Just think about it, each year bees provide a free service vital to humanity, estimated by the Inra (French national institute for agronomic research) at some 155 billion euros. This has no value on Wall Street, but it is huge compared to the turnover of an international company like Monsanto, which is only one billion US dollars.

Is it true the bees are disappearing?
Yes, in many countries, the exportation of our agricultural model of the taxpaying farmer owning hundreds of hectares, of intensive monoculture using chemical fertilizers, pesticides, herbicides and, soon, of genetically modified plants weakens the bee colonies. Green deserts without insects are appearing throughout the world.
We are in a civilization of extremes. Farming uses petrol, it is dependent on government subventions, and that’s certainly not a model to export. On top of that, it generates enormous needs in terms of irrigation, a folly when you consider that the gold of tomorrow will be drinking water…

It’s said that if the bee died out, the human race would only have a few years left to live…
It’s an image, but if indeed all the bees disappeared, the world as we know it would be in danger. And the costs in human lives enormous… It’s civilization’s choice. We can continue to destroy the Earth while the whole time putting billions into research into colonizing outer space. But for whose benefit? That’s the question, and if that is the case, we might as well forget about human rights and the concept of individual freedom.

Which of the bees’ qualities has touched you the most?
The collective way of life of that insect puts up for interrogation our own social models. A Breton beekeeper told me that if a colony found itself with a food shortage, all the food would be shared amongst all the members, up until the end. A beautiful example of solidarity.

You have been working for eight years now on the subject of the bee. How do you do it ?
That’s the difficult question. Since the release of my book “Le Peuple des abeilles” (The Bee Nation), my photos have sold throughout the world. It is, I hope, the start of a success story: I showed up at the right moment with the right subject. Today, my work is regularly exhibited in France – this past summer at the Photo Festival “Peuple et Nature” in La Gacilly, but also in big cities like Paris and Lille, in nature parks, libraries and museums of natural history… Foreign museums have started contacting me and I will soon have a permanent exhibition in Australia. My work has become a photographic reference on the bee and since 2012, I have the Melvita Foundation as sponsor.

What’s your favorite honey?
Ah yes, honey… I’ve tried some everywhere in France and a lot throughout the world. With the diversity of our land, we have in France an exceptional palette of honeys.
Beekeepers know how to make the most of this wealth by producing honeys from a specific flower: lavender, thyme, rosemary, chestnut, linden, acacia, heather, and even ivy. But for me, honey remains linked to childhood, and wherever it may come from, I will always be a fan of mountain honey!

Are you often stung?
It’s a question often asked… Ask a woodworker if he sometimes hits his fingers with the hammer! I work with the same protection as beekeepers, which still doesn’t prevent some stings, which happen when you don’t pay attention, or if you annoy them too much. For this work, I only had two or three real accidents, due to human error, one in Nepal, another in Cameroon, which earned me about forty stings and the last one in India when climbing a cliff…

Are you scared of bees since then?
I’d sooner say that I love them more and more. Recently, I was up on the roofs of New York to meet beekeepers who set up hives despite the city’s prohibition of it. It was surprising: they raise bees of Italian origin, and I never protected myself. I even took pictures of kindergarten children discovering the bee without any protection… It makes you wonder if it’s not fear that brings on the stinging.

What advice would you give for protecting the bee?
Everyone can contribute by buying honey from locals beekeepers. People who have a garden: plant flowers and melliferous trees, create an embankment, hedges and opt for natural methods and products against insects and parasites. And for those who want to renew with tradition, put a hive in your garden and plant some trees.